As mentioned in my previous discussion on the photographs and videos used in the upcoming Fashion & Function: North Dakota Style exhibit, I am newly arrived in North Dakota. As a result, I’m making many new discoveries—practically daily—and my colleagues here at the State Historical Society of North Dakota have been extremely gracious in guiding me along the way.

While conducting research and reviewing photographs related to Fashion & Function, I was introduced to the phenomenon that is powwow. This is something new and wonderful that I have never experienced. I was especially struck by the display of vibrant colors, the energy of movement, and the great variety of design and construction making up the distinctive regalia. During my initial research phase, it became clear that the spirit of powwow would be a major contributor to the exhibition. 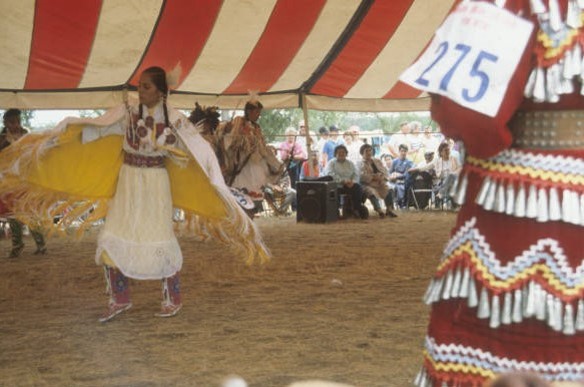 My vision was to create a three-dimensional tribute to the powwow. I envisioned an oblong circle forming an archway of movement and color extending from one side of the gallery, soaring over the heads of visitors, and landing on the opposite side. I wanted to show the great variety of regalia and at the same time somehow capture the unabashed pageantry of the event. In my mind it involved “a cast of thousands!” Not really, but you get the idea.

I couldn’t wait to attend my first powwow and experience the phenomenon for real. But, like so many other experiences of the past year, the pandemic cancelled the United Tribes Technical College International Powwow, and that experience was not to be. At least, not for now. Thus, my understanding remains limited to photos, archival film footage, and the tales of my colleagues. 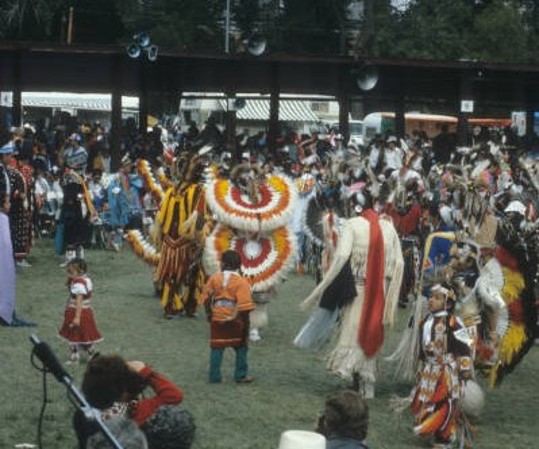 Also, what I didn’t know prior to consulting with the curatorial staff is that we have very few examples of powwow regalia in our collection. Curator of Collections Research Mark J. Halvorson explained that regalia components often remain within families or are gifted to friends, sometimes being reworked or added to. Regalia seldom finds its way into museum collections. I was crestfallen. So much for my cast of thousands. However, the spirit of the powwow remains a significant part of the exhibit, with the bold color palette and cavalcade of patterns influencing many of the design choices making up the space.

That being said, we do have a small holding of regalia in our collection, and those pieces are included in the exhibition. A magnificent jingle dress, several ribbon shirts, and a full suite of traditional regalia from the early 20th century appear in the Powwow Pageantry section. But we also went further afield, approaching the Minnesota Historical Society for several loans to supplement our holdings.

That loan narrative became a story in itself, again due to the impact of the pandemic. The museum staff in Minnesota was furloughed, and communications remained next to impossible for months. That is, until a very narrow window of opportunity allowed two of our staff to make their way to St. Paul to retrieve the objects being loaned. 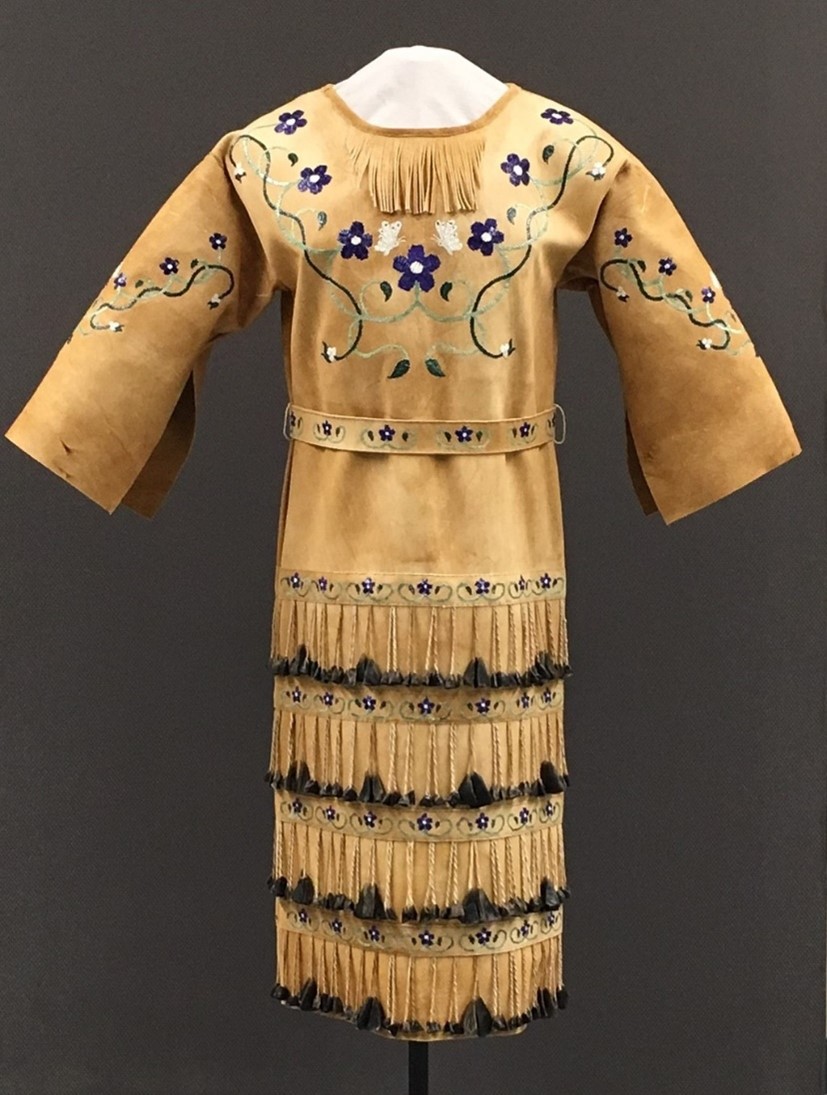 Included in this loan is a stunning jingle dress created by the late Assiniboine artist Orvilla Longfox, Blacktail Deer Woman, in 2016. The distinctive feature of the garment is that the traditional metal cones that make the jingle sound associated with these dresses are replaced by a multitude of tiny deer hooves. The dress rhythmically clicks rather than clangs. 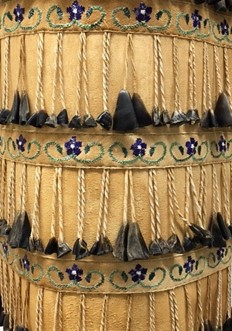 Detail of deer hooves suspended on twisted buckskin fringes. Variations in the size and repeated spacing of the hooves add to the visual symmetry of the dress.
From the Collections of the Minnesota Historical Society, St. Paul, Minnesota

The dress required a fabrication period of one and a half years due to the time required to assemble the decorative elements. Orvilla had a network of friends and neighbors helping collect both the deer hooves and the porcupine quills utilized in the quillwork embellishments. Notes accompanying the loan state that most of the components were harvested from roadkill, and Orvilla would find bags left on her front porch with the materials at hand. With these raw materials she created something truly beautiful. 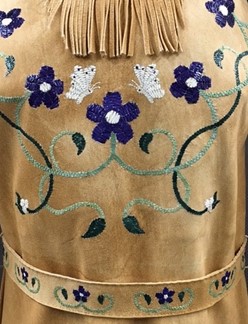 Detail of undulating quillwork vines, flowers, and butterflies on the buckskin bodice and belt.
From the Collections of the Minnesota Historical Society, St. Paul, Minnesota

I am thrilled we can include this stunningly unique example of regalia as part of the exhibition.

Fashion & Function: North Dakota Style is currently taking shape in the Governors Gallery and will open in later this month.