Not So White Wedding Dress

A white wedding dress was not popular fashion until after 1840 when Queen Victoria wore white to her wedding and started a fashion trend in Europe and North America among the high society set. It was a sign of wealth to own a gown that could be easily soiled or only worn once. In many non-western cultures, wedding dresses come in a variety of colors. For instance, the traditional Germans from Russia wedding dress was black. This Icelandic folk dress, not in the exhibit, is made of black wool with fabulous gold and wool embroidery. It was worn by Elin Stefansdottir during her marriage to Olafur Thorsteinson in 1861 in Hruni, Iceland. She came to the United States in 1878 bringing this dress with her.  They settled near Pembina.

In Norway, the traditional regional bunad would be worn with a wedding crown for the nuptials. This dress is from the Hardanger region. The colors, embroidery, and style are typical from that part of Norway. Unfortunately, we don’t know who made or wore the bunad, but the crown (pictured below) was possibly made by J. Angell Jacobsen from Aalesund, Norway, listed in the 1910 Norwegian census as a goldsmith. 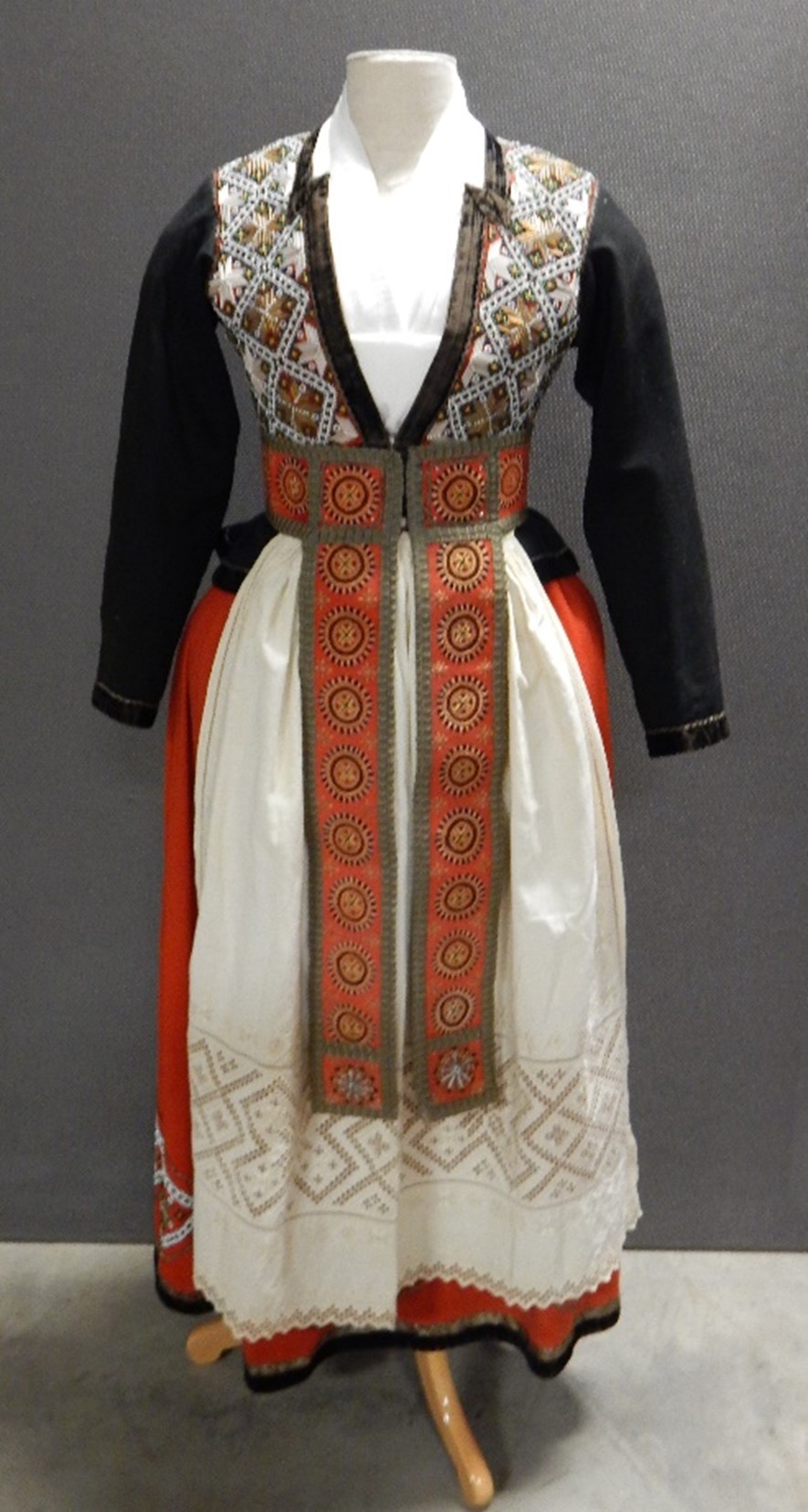 Crowns were often too expensive to be owned by one woman. Instead, a family or a church would own one that would be available for many brides. 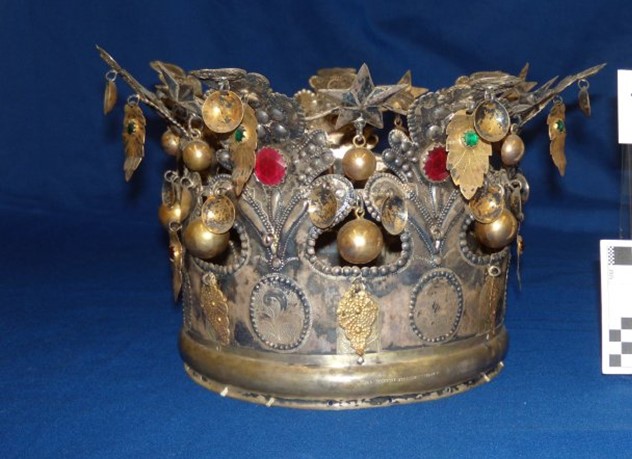 In the United States, it wasn’t until after WWII that it became common for women of all levels of society to wear a white gown. Prior to WWII, dresses were usually homemade or sewn by a skilled seamstress. A white gown intended to be worn only once would not have been affordable. Typically, a woman’s wedding dress was her “best dress” for years after the ceremony, whether the bride had a new dress made for the occasion or used one she already owned.

As an example, this blue striped jacket and blue skirt were worn by Jean Myrdal Jensen for her wedding in 1951. The jacket and a shirt (not in the exhibit) were purchased early in 1951 from a dress shop in downtown Fargo. They were purchased without a specific plan. Later in the year, when she started to plan her wedding, she chose this suit because she couldn’t afford a single-use white gown. Jean made this skirt, though we don’t know whether, she made it to match the jacket or bought the jacket to match the skirt. Jean stated she wore this suit after her wedding, though she did not wear the jacket as often as the blouse and skirt. 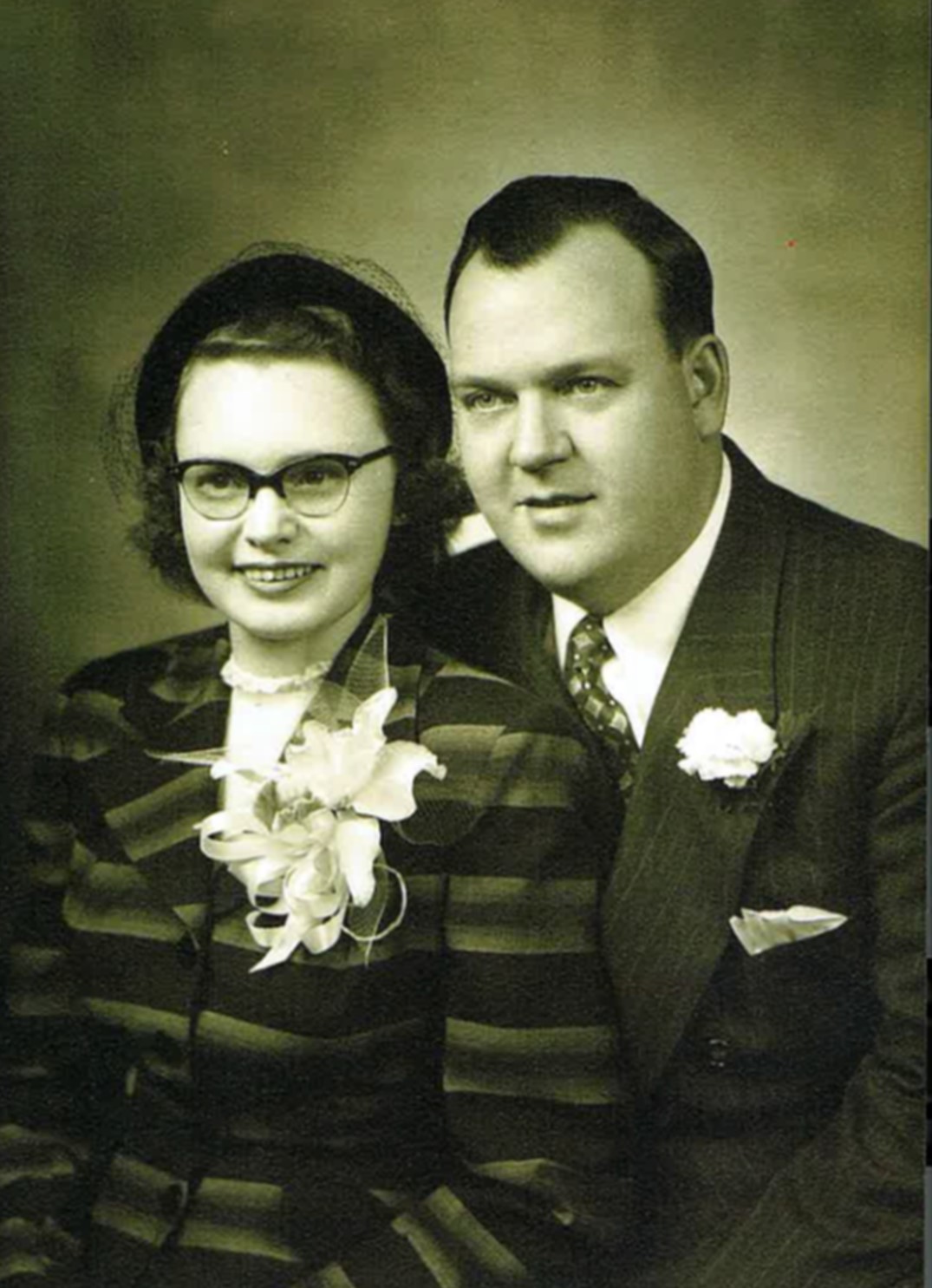 Jean and Clarence Jensen on their wedding day, November 10, 1951.

Here is an interesting side note on women’s dress sizes. In 2007, one of Jean’s granddaughters wore her suit in a family fashion show. The granddaughter wore a size 5, and the suit fit her. Yet Jean said that she was a size 14 in 1951. You might be scratching your head about this, but Jean’s suit is a great example of what is known as “vanity sizing.” The skirt’s 28” waist was typical of a size 16 in the 1950s but was typical of a size 4 by 2011. Most women understand that a size 10 in one store is more like a size 12 in another or a size 8 in a third. There are no standard sizes in the United States. As people are getting larger, clothing manufacturers are changing the sizing to feed into their vanity. This way, women who wore a size 10 in high school may be able to say they still wear a size 10 twenty years later, even if they have gained more than a few pounds.

An Inside Look, Literally