Hats and Hunting: Fashion and Feathers in Our Museum Collection

What do Mott, Crosby, Ellendale, Wing, and Scranton all have in common? They all made North Dakota Tourism’s “Top 5 Places in North Dakota to Hunt Pheasants” list. With its colorful plumage and tasty appeal, the pheasant has helped put North Dakota on the map as a prime hunting destination. But did you know pheasants are not native to our state? The long-tailed bird, which hails from Asia, was first introduced to southern North Dakota in 1917. At that time, pheasant feathers were becoming popular accessories in the millinery industry, and feathered hats were in demand as haute couture for the wealthy. Long, gorgeous pheasant feathers added an exotic dimension to a lady’s chapeau. Sometimes the entire bird pelt was used to create a headpiece.

Fashion and Function: North Dakota Style will showcase three women’s hats from the state collection that are adorned with pheasant feathers. In the early 1990s, Donna Jane Weinrebe (1918-2007) donated numerous personal items worn by herself, her mother, Ethel Weinrebe, and her sister, Juanita Weinrebe. Among those donations were three hats. The one below was made by milliner Genevieve Huyck (1889‒1971) of Minot. Its label reads: “HATS BY GEN, Minot, ND.” This creation features the skin, feathers, and head of one unlucky pheasant atop the hat, complete with sequin eyes.

Note the sequin eyes placed into this pheasant headpiece created by Genevieve Huyck of Minot.
SHSND 1993.33.4

This small hat of pheasant feathers and tanned pheasant skins is lined in brown silk faille fabric and was also made by Genevieve Huyck around 1940. It was most likely worn by Ethel Weinrebe. 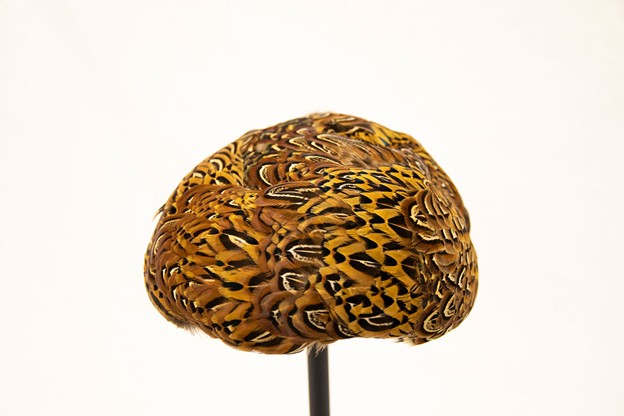 Donna also donated this navy blue felt beauty that can fold flat, made by Vogue Designs of New York. A long pheasant feather adorns the side.

Sometimes the donor’s backstory is as interesting as the items they give us. Donna, for instance, lived a life of international travel. We don’t have all the details, but we do know that as a young girl, she attended a private school in Minneapolis, Minnesota, then graduated from Minot’s high school. In 1928, the Weinrebe trio of women booked a European trip. After a stint at the University of North Dakota from 1936 to 1938, Donna transferred to the University of Arizona in Tucson. She was living in New York in 1947, and then traveled to Brazil and worked in Rio de Janeiro until 1951. In 1959, she traveled to Puerto Rico with her second cousin, North Dakota Gov. John Davis. We also know Donna was employed as an accountant in Germany from 1958 to 1961. She retired in Sun City, Arizona.

I hope Donna acquired many splendid chapeaus during her global adventures. Based on a photo in our collections of Donna’s mother, it would appear that Ethel initiated the Weinrebe women’s love of hats.

Ethel Lloyd Weinrebe of Minot sports a voluminous hat circa 1908. She was born in 1886 and lived to age 102. Active in the community, Ethel was awarded the Minot Sertoma Club’s Service to Mankind Award in 1972 for her work with the Republican Party, her involvement in organizing Minot’s first Women’s Club (and later serving as president), and her work with the Red Cross.

1920s Fashion in the Governors' Mansion