1920s Fashion in the Governor's Mansion 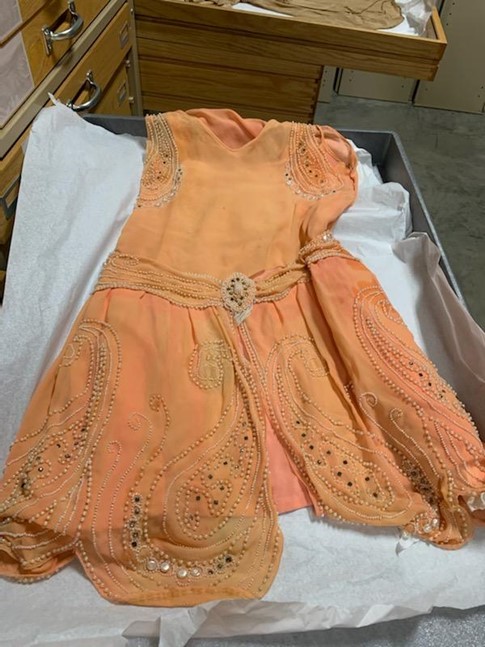 First Lady Grace Sorlie’s coral chiffon dress encrusted with glass beads and faux pearl trim was worn for a state inaugural ball in the 1920s. This Sorlie dress, one of two in the state collection, is in fragile condition and was not selected to be part of the upcoming exhibition.

Who was Grace Sorlie? Born in Hillsboro, Grace Hilleboe (February 24, 1889−June 19, 1965) attended school in Buxton and Grand Forks. She earned an education degree at the University of North Dakota in 1914, then taught in Minneapolis and Grand Forks. Grace became the second wife of Arthur Sorlie (April 26, 1874−August 28, 1928) in 1920, about a year after the death of his first wife, and immediately become a mother to his three children. Grace and Arthur had three more children, one who died as an infant. Only a few years after their nuptials, she entered the world of politics to support her husband and found a new niche as the state’s first lady.

State politics was heated in 1924. Arthur Sorlie (R-NPL) defeated incumbent Ragnvald Nestos (R-IVA) in the gubernatorial race to become the state’s fourteenth governor. The big political news at that time was the struggle between the Nonpartisan League (NPL) and the Independent Voters' Association (IVA) in the June primary elections for control of the Republican party. The NPL membership, primarily farm and rural, bitterly opposed big business interests. They favored state-owned industries including the Bank of North Dakota and the State Mill and Elevator. The IVA considered the NPL platform to be too radical and socialistic, and they did not support state ownership of industry. With Sorlie’s win, the NPL returned to power. Sorlie, however, didn’t have complete support from the League. Some, such as his own lieutenant governor, Walter Maddock, disliked Sorlie for being conservative.1 Grace enjoyed being heavily involved in the political scene, disliked criticism of her husband, and was a “feisty” protector of him, according to son Glen. 2

Gov. Sorlie was reelected to a second term in 1926. At that time, governors served two-year terms. The petite 5’2” first lady wore an elegant rust-colored velvet dress with a dropped waistline and thin belt to one of their inaugural balls. As a first lady in her mid-30s, Grace chose to attend both balls wearing the new dress silhouette of a generation rejecting corsets. The Roaring ‘20s brought a looser, straighter, simpler, and shorter (but still below the knee!) feminine fit that reflected a major movement from restrictive, tight-waisted floor-length gowns. 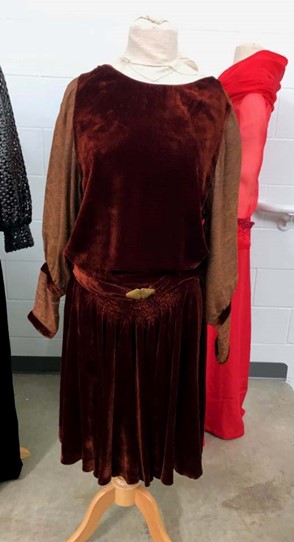 First Lady Grace Sorlie chose to wear the popular drop waist evening dress of the 1920s to both inaugural balls. 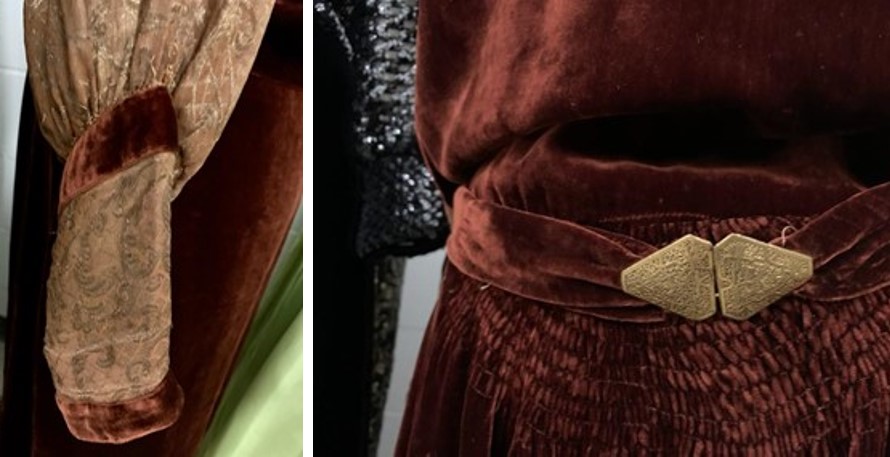 The first family and Grace’s mother moved into a “pretty badly run down” executive mansion in Bismarck, according to Frances Shafer, who became North Dakota’s first lady in 1929. In addition to ushering in a new era of trendy clothing, Grace also added her fashionable style to the declining home. According to Shafer, “Grace Sorlie did much in the way of repair and redecorating, but the times limited her to the first floor. We were going through a depression then.” She shared that Grace added two dark red American Oriental rugs, new chandeliers, and “very lovely” wallpaper. 3 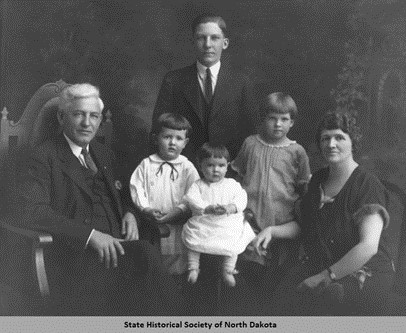 Gov. Sorlie died in office on August 28, 1928, after a brief illness. Grace moved back to Grand Forks to raise her children and was well known for her work with political, musical, and community organizations and for her love of entertaining. Stepdaughter Ruth Sorlie Edick later established the Grace Sorlie and Stella Mann Nursing Endowment at the University of North Dakota in honor and memory of her mother and aunt. Grace’s sister, Stella, was a prominent community leader in Bismarck as publisher of the Bismarck Tribune for many decades.

As part of her legacy as first lady, Grace Sorlie left chic touches on the governors’ mansion, now cared for by our staff as a state historical site, and added important artifacts to our museum collection—two significant examples of 1920s fashion worn for state functions. She was also serving as first lady when the USS North Dakota silver service set was brought to the state in 1926 after the ship was decommissioned. The first lady and governor hosted a reception attended by 800 people to celebrate the silver service coming home. The service continues to be preserved by the State Historical Society. 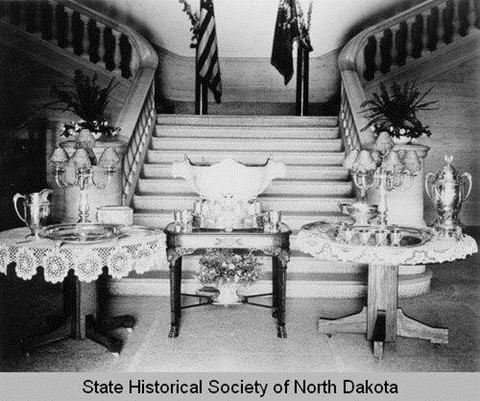 USS North Dakota silver service items were on display in 1926 at Liberty Memorial Building in Bismarck after traveling on the ship. You can view the silver service on exhibit at the State Museum. SHSND CO307-3