Thousands of culturally significant photographs, wax cylinder recordings and journals recently returned to the place where they were created over a century ago among the Mandan, Hidatsa and Arikara tribes in North Dakota.

The return of the collection now in the archive of the Minnesota Historical Society was done through a process called digital repatriation. It’s a new tool being used by institutions including museums to return archival quality copies of cultural materials that are not physical objects back to the tribes they belong. These materials are considered intellectual properties.

“This is second best from actually getting the items back themselves, however, we can make it available to a much broader audience a lot easier,” said Dr. Twyla Baker, an enrolled member of the Mandan, Hidatsa, Arikara Nation in northwestern North Dakota and president of the Nueta, Hidatsa, Sahnish College. 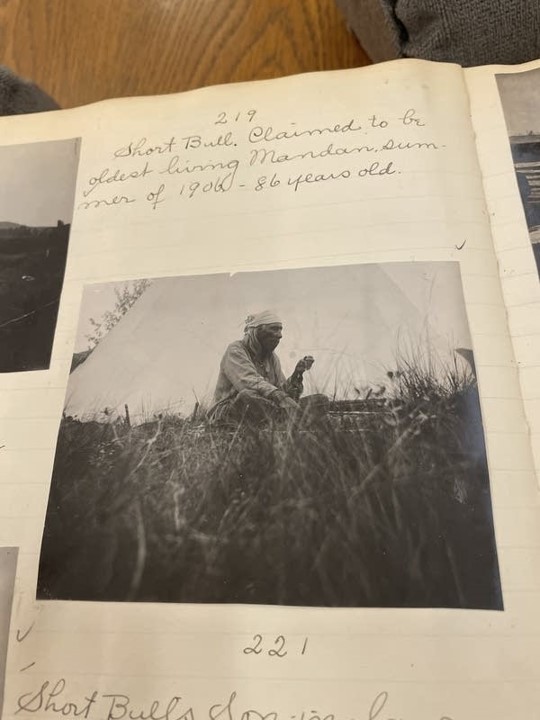 Dr. Twyla Baker’s great-grandfather, Short Bull, with notation of his claim to being the oldest living Mandan at 86 years old in the summer of 1906.

Meeting over pizza leads to collaboration

Back in 2016, after a conference, Baker was invited to a Minneapolis pizzeria by close friend, “Reservation Dogs” actor/writer, Dallas Goldtooth. There she met former Minnesota Historical Society curator Ben Gessner.

"She sat down next to me at the Pizza Luce,” recalled Gessner. “This was my first time meeting her ever, and you know, knowing who she was, and she just goes, 'So, you're the white guy that's got all my things,'” Gessner laughed. “And I was like, 'Yeah, yes, that's me.'"

While this interaction wasn’t the first between MHA Nation and the Historical Society, in time it would prove to be one of the most fruitful. The “things” are part of the Gilbert Wilson collection — a huge catalogue of material related to the Mandan and Hidatsa ways of life collected in the early 1900s.

Gessner described Wilson, as an avocational, semiprofessional anthropologist for the American Museum of Natural History in New York. He was also a Presbyterian minister whose goal, at least in the beginning, was converting tribal members to Christianity.

Gessner says in the early 1900s most anthropologists believed in what he calls a salvage and extractive approach.

He says the belief at the time was, “Indians are going away. They're either going to be assimilated completely or they're going to like, quote, unquote, sort of, die out or whatever. Like the idea in anthropology was like, get in, get the things, get them in museums so then you're at least preserving something about the culture.”

But Wilson took another approach. After first going to the Standing Rock Reservation which straddles the North Dakota and South Dakota border, he traveled to the Fort Berthold Reservation. It was there he studied the Mandan and Hidatsa from 1907 to 1918, focusing on their agricultural practices.

Eventually, Wilson was adopted by a tribal elder named Buffalo Bird Woman. He used what she taught him to write his dissertation “The Agriculture of the Hidatsa Indians: An Indian Interpretation.”

That earned him the first Ph.D. in anthropology ever awarded by the University of Minnesota. Wilson’s thesis was first published in 1917 and republished in 1987 as “Buffalo Bird Woman’s Garden: Agriculture of the Hidatsa Indians.” 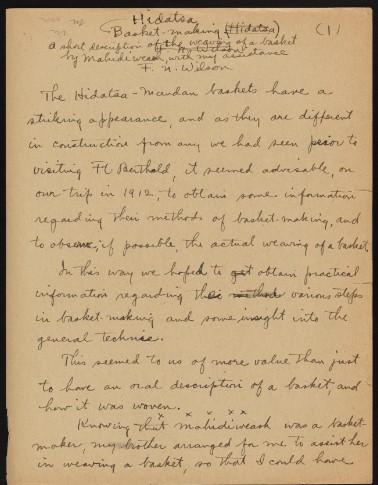 Courtesy of the Gilbert L. and Frederick N. Wilson Papers at the Minnesota Historical Society

After that initial meeting over pizza, Baker says Gessner began talking to his superiors and other colleagues at MNHS.

“It started to take root and people got behind it and started championing it, and it was completely necessary because I live way out here on the reservation and he’s the one who’s located in St. Paul,” Baker said. “We needed people who were on the ground, who would be able to take the work on and who really believed in it, and really saw the justice tied to making sure that these items came back to us. However that took shape.”

Before Wilson’s collection could be digitally repatriated the museum had to reassemble everything because it was separated between several departments.

“Essentially, you’ve got a garden hoe with nothing in the database about it,” Gessner said. “And then realizing like, ‘Whoa!’ when you go back to the field notes and photographs, this is the garden hoe that was made by Buffalo Bird Woman.”

Early in the planning stages while exploring the collection with other MHA members someone opened a thick photobook to an exact page with Baker's grandfather, James, dressed in full regalia and it brought her to tears.

“It just literally hit home for me so hard it was like James was saying 'Here my girl, it's time for us to go home, come get us,'" she said. 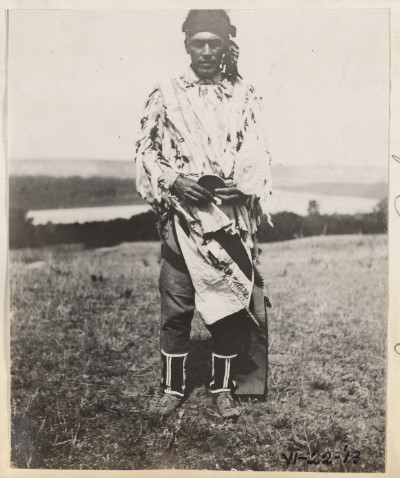 Courtesy of the Gilbert L. and Frederick N. Wilson Papers at the Minnesota Historical Society

After Wilson's death in 1930, his wife split his collection between MNHS and the American Museum of Natural History. She also stipulated that if the materials were to be published researchers needed permission from both institutions. She never mentioned anything about the MHA Nation being included.

Kate Hujda is the curator of manuscripts for the MNHS. One of her first assignments after being hired in 2019, was finding a way to work with the Wilson stipulation.

“It was a restriction that we needed to clear before we were able to repatriate these materials, just so that the Native American community when they wanted to use these materials for exhibits, publication, research, any sort of access or use, they would not have to jump through any of these hoops that museum professionals are really used to jumping through,” she said.

Hujda partnered with another professional from the Natural History Museum so that it would not restrict use of the digital materials moving forward. Hujda said their team also focused on how to do the actual work, discussing what steps they needed to follow and how to scan the materials so that they can be used. She said MNHS had not done something to this scale in terms of the size of the collection and the potential impact of getting the materials back to the MHA Nation.

Work on the project stopped briefly because of the pandemic but resumed in Sept. 2020. Finally, in May of this year, one terabyte of preservation quality copy and access copy was digitally repatriated to the MHA Nation.

By that point Gessner had left MNHS to become the exhibits and cultural manager for the Lower Phalen Creek Project in St. Paul, a Native-led environmental nonprofit. However, he attended an event in August recognizing the accomplishment of everyone involved.

“I get to be a part of watching a cultural renaissance essentially,” Gessner reflected. “In museums I think there are just huge philosophical shifts happening. And part of that is because of this incredible organization and pressure from Native communities and tribal governments themselves, like, ‘You have to change if you’re going to be relevant, you have to change, and it’s got to look like this.’”

Hujda said MNHS plans to continue doing this type of work with other Indigenous nations. She added now that the workways are in place the process will be more efficient and faster.

“It's strange to say it but I feel like I've brought my grandpa home.”