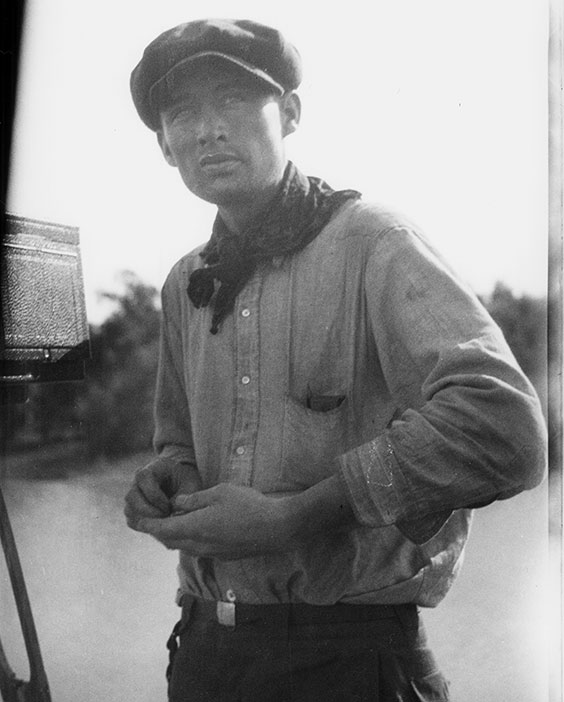 Nothing gets a curator’s heart racing with glee like finding a mysterious box on a storage shelf. Recently one particularly large unmarked box was discovered by several Audience Engagement & Museum collections staff. What mysteries lie within?

Inside were some 30 rolled strips of painted canvas with torn edges. As these 10-foot strips were unrolled, the collections team realized these pieces came from State Historical Society murals created as backdrops for 1930s natural history exhibits. Clell Gannon (1900-1978), a regionally known artist and historian, painted the canvases. Clell Gannon lived an adventuresome life as a regionally known artist, poet, and historian. He also created a charming stone home in Bismarck, just a few blocks from our Foundation offices. You can view several of his murals at the Burleigh County Courthouse. We also house some of his artwork in our museum collections.

Part of this story remains a history mystery, but we do know Gannon’s North Dakota badlands landscape scenes hung in the Liberty Memorial Building, now the home of the State Library. In 1980, the State Historical Society staff moved all museum collections from their space in the Liberty Memorial Building into the North Dakota Heritage Center which opened in 1981. The unexplained history mystery evolves around “why” and “who” tore the 13’ x 10’ murals into long narrow strips and placed them in an unidentified box on a shelf during the move.

We’re thrilled about discovering these fragile murals. While we can’t put the physical pieces back together, we are currently in the process of digitally bringing Gannon’s artwork back to life. In June, while the State Museum was closed due to COVID-19, we opened the box since we had daily access to sparkling clean and empty museum corridors. Our curators carefully unrolled each 90-year-old strip on long tables and gently brushed off areas of flaking paint. All the strips have deteriorated, but oh my, they are still beautiful. Gannon’s bison—blurred from peeling paint—represent a former generation of these majestic herds that continue to thrive in the badlands today. Watch for our digital reveal of these murals in early 2021. See more photos in the Gallery.