Partners of the Passport to North Dakota History Project

The Passport to North Dakota History project is one of the most significant partnerships the Society and the Foundation have developed. The award-winning passport is one of the most sought-after tourism guides for our state. Pocket-sized, easy to read, and chock-full of interesting history, it is estimated that more than $300,000 in funding and in-kind support has been generated by the passport and collaborating projects. It all began as an activity to help celebrate the Lewis and Clark Bicentennial in 2003-2006 and has continued ever since. The passport project has been expanded to include dozens of partners and has attracted attention of campers, visitors, life-long learners, and school children.

Click on the image below to read more about the Passport project. 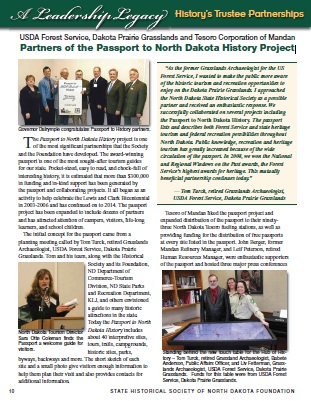 “Public knowledge, recreation and heritage tourism has greatly increased because of the wide circulation of the passport. In 2008, we won the National and Regional Windows on the Past awards, the Forest Service’s highest awards for heritage. This mutually beneficial partnership continues today.”

View the latest Passport to History