The State Historical Society of North Dakota and its Foundation hosted its first-ever Recognition and Thank You Dinner for donors and supporters May 4 in Bismarck. Honored guest was Harold Hamm, Chairman and CEO of Continental Resources, whose $1.8 million gift for the expansion of the was one of the first large donations to the projects. Others recognized were former First Lady Grace Link and the North Dakota's Governors since William Guy and the North Dakota Legislature. Leadership Legacy Awards were presented to Terrance Rockstad and Larry Rolfson, both of Bismarck and the Family Legacy Award was presented to Hollis Nappen, also of Bismarck. 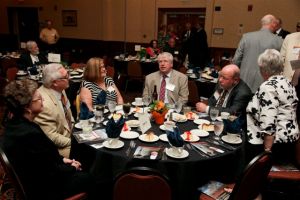